There arenâ€™t many fans of spiders out there, we must admit. 8 legged creepy crawlies that can send a grown man screaming out the door. But what if you were told you werenâ€™t safe from them even in middle of the deepest and darkest oceans?

In the Pacific Ocean lurks a monstrous nightmare of the sea; itâ€™s called a Giant Spider Crab (also known as the Japanese Spider) and certainly wins the award for being one of the most terrifying crustaceans to walk our seabeds. If the overall appearance of these spider like crustaceans wasnâ€™t terrifying enough, here are ten reasons why these creatures are truly frightening.

Undeniably the size of this crustacean is more than likely the first thing that youâ€™ll notice. With its incredible 12 feet (3.6 meter) long legs. At such an impressive size these gigantic crabs can weigh up to a hefty 42 pounds (19kg). With their sheer size and weight they could easily consume a human child if they ever had the desire.

imgur.comSource:
Just like its smaller counterparts (the common crab) The Giant Spider Crab is robust, it needs to be, as it can be discovered at depths of 490 to 980 feet or even more, down in the ocean. They can easily withstand the bitter battering of the ocean floor.

flickr.comSource:
The Giant Spider Crab comes with a serious pair of pincers. When their species were discovered back in 1836 they were accredited for the amount of damage they could cause with their evil looking nippers.

upload.wikimedia.orgSource:
There is just one single fishery in Japan that hunts these monsters, but they can be incredibly difficult to find and successful catch due to their dark sea bed environment. Luckily for these crabs, they are left alone during mating season. That must be good news for them, right?

flickr.comSource:
When sat on your plate, we are not convinced that the Giant Spider Grab looks any less terrifying, however in Japan they are known as a delicacy and found on most restaurant menus.

flickr.comSource:
These creepy crustaceans are nearly immortal in terms of lifespan. The Giant Spider Crab have been known to live up to an astonishing 100 years. We wouldnâ€™t want to try and pry that secret from them.

imgur.comSource:
These scavenging spider crabs will each pretty much anything thatâ€™s smaller than them. While making their homes on the ocean floor, they are in a prime position to harvest from anything that lives there.

flickr.comSource:
If their name wasnâ€™t a hint, the Giant Spider Crab received its name on their spider-like appearance. Their creeping and crawling method of walking is nothing but eerie as they shop around the ocean floor for their next meal.

imgur.comSource:
Itâ€™s fair to say that the Giant Spider Crab is smarter than we give it credit for. These gigantic crabs have been documented decorating themselves with a range of objects and even other animals that they discover on the ocean bed. We must certainly give this creepy crustacean kudos for that!

imgur.comSource:
Believe it or not these Giant Spider Crabs have been known to be extremely yet remarkably gentle with their handlers. Weâ€™re not entirely convinced, we believe it could be a new unstudied hunting technique.

flickr.comSource:
If you are still not phased by this creepy crustacean, weâ€™ve been doing out research and discovered them absolutely terrifying videos of these monsters of the sea.

Despite how gentle these crabs have been reported to be by their handlers this footage tells an entirely different story as a diver is attacked. 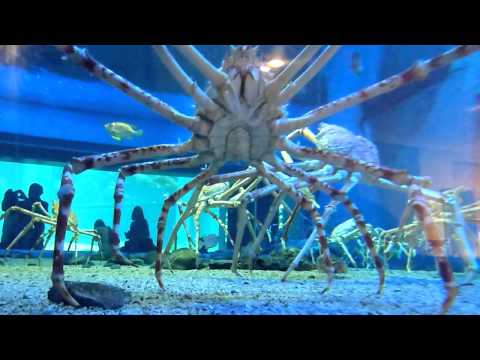 ▶
Not going to sleep tonight? Neither are we. The Giant Spider Crab is certainly worthy of being in its own horror movie. Even though they are reported to taste good, weâ€™d rather keep them in the dark depths of the oceans where they belong, and away from us! 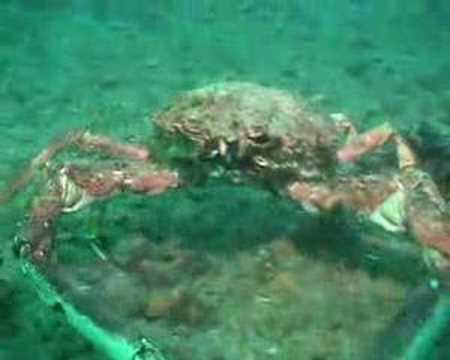